Implemented on 31 December 2015, the ASEAN Economic Community proposes to consolidate the economic integration of the region. This review summarizes the state of the ASEAN integration, how it will benefit the private sector to do business in the region and the progress of each country towards this ambitious goal.

From the official report of May 2014 by the ASEAN, entitled “Thinking Globally, Prospering Regionally – ASEAN Economic Community 2015” the following table summarizes its very positive economic and demographic evolution between 1990, 2000 and 2012. 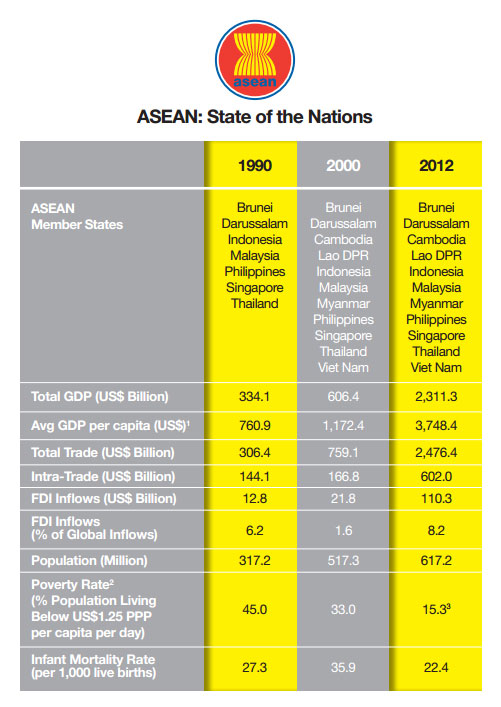 For more information on the state of business in each ASEAN country, check the country’s business homepage on ASEAN UP. For each location, you will be able to consult the latest key data, get an overview of the population, economy, business sectors, trade as well as an easy access to the best and most useful resources and tools for each country.

The ASEAN countries are engaged in a process to transform ASEAN into a real economic community by the end of 2015. Originally built as a political alliance to limit the spread of communism in Southeast Asia, ASEAN gradually became a diplomatic organization to manage regional issues and expand trade with the inclusion of Vietnam, Cambodia and Laos and their opening to a market economy.

ASEAN leaders have now embarked the Southeast Asian association to the next step of economic development, which will also ultimately bring the Southeast Asian peoples closer. They have engaged since 2007 towards the integration of ASEAN into an ASEAN Economic community based on 4 economic pillars:

4 pillars of the ASEAN Economic Community

Through the implementation of these 4 pillars for economic integration, stability, competitivity and dynamism, ASEAN is bound to realize the principles of an Economic Community, inspired by the model of the European Union.

5 core principles of the ASEAN single market and production base

Various business leaders such as AirAsia CEO Tony Fernandes, and political ones like Singapore PM Lee Hsien Loong have stated that ASEAN will require more time beyond 2015 to fully realize the vision of the AEC. Yet, ASEAN is well advanced on its roadmap to formally realize the AEC by December 2015 as it achieved almost all its targets in the reduction of trade duties.

To present all the work that has been completed and inform ASEAN economies and businesses, the Association of Southeast  Asian Nations has produced the report “Thinking Globally, Prospering Regionally – ASEAN Economic Community 2015” that highlights the achievements towards the AEC and its vision for the future.

ASEAN countries form a market of over 600 million consumers and combined GDP of almost US$3 trillion, with a vibrant and growing economy that presents fantastic economic perspectives for the future of ASEAN.

Concerning the free flow of goods: as of 2010, duties were eliminated on 99.2% of tariff lines for the ASEAN-6 Member States (Brunei Darussalam, Indonesia, Malaysia, Philippines, Singapore and Thailand).

In the other member states (Cambodia, Lao PDR, Myanmar and Viet Nam), 97.52% of tariff lines have been reduced to 0-5%. Measures to reduce technical barriers to trade are also being implemented.

ASEAN Member States are also working towards the achievement of the free flow of services through the ASEAN Framework Agreement on Services (AFAS).

ASEAN is committed to building an investment environment to attract businesses: it created the ASEAN Comprehensive Investment Agreement (ACIA), which includes commitments towards the liberalization and protection of cross-border investments operations, together with best practices for the treatment of foreign investors and investments.

For the free flow of capital, stock exchanges from Indonesia, Malaysia, Philippines, Singapore, Thailand and Viet Nam are working together to form the ASEAN Exchanges, aiming to promote ASEAN capital markets and to offer more opportunities to investors in the region.

ASEAN works towards facilitating the free flow of skilled labor: the ASEAN Agreement on the Movement of Natural Persons (MNP) provides a legal framework to ease temporary cross-border movements of people engaged in the trade in goods, services and investment.

By creating a competitive economic region, the AEC wants to foster a culture of fair competition, which includes protection of consumers and guarantees for intellectual property rights. It also requires infrastructures (highways, airports and rail links, power grids and gas pipelines) under planning and development.

The AEC will enhance competitiveness and expansion of SMEs in ASEAN through various projects under the Strategic Action Plan for ASEAN SME Development (2010-2015).

Integration into the Global Economy

Thanks to various “ASEAN+1” free trade agreements with the People’s Republic
of China, Japan, the Republic of Korea, Australia, New Zealand and India, ASEAN is positioned in the middle of global supply chain, developing strong trade connections with the major Asian economies and generating new business opportunities.

Increased business interest in the AEC

ASEAN is benefiting from a steady increase in Foreign Direct Investment (FDI), with an average growth of 14% since 2000.

As the 2015 deadline of the AEC arrives, ASEAN expects business interest in the AEC to increase, as more and more businesses will benefit the ASEAN integration and develop ASEAN-centered strategies in their corporate policies.

This very positive sentiment towards business in ASEAN is shared by many local and foreign companies, as shown by the US companies outlook in ASEAN.

“SHARED MARKET, SHARED BENEFITS”
“FROM TEN to ONE”

“ASEAN: HOME FOR YOUR INVESTMENT”
“PARTNERS IN BUSINESS”

“MAKING CAPITAL WORK FOR YOU”
“EXPANDING ACCESS TO FINANCE”

“ASEAN PROFESSIONALS ON THE MOVE”
“BEST PEOPLE AND BEST PRACTICES”

6 Replies to “Benefits of the ASEAN Economic Community – AEC”