Manila’s larger urban area, “Mega Manila”, is set to reach 30 million inhabitants by 2030. To cope with its growth and relieve the pressure from the population, the Philippine authorities have devised an ambitious plan of integrated urbanization and transports that will foster the sustainable development of the country’s capital city.

Manila was initially planned as a city with large roads upon which flourished residential areas and which made it a peaceful and accessible haven. Its massive development in the last decades has however brought new challenges that now need to be addressed if Manila wants to thrive in the coming years and decades.

Note: As we have seen with other resources, similar urban planning is also conducted in other ASEAN cities such as Kuala Lumpur (Malaysia) or Bandar Seri Begawan (Brunei).

Manila now presents some severe problems to be tackled promptly if it is to move towards a better future:

However, the number one challenge that is causing all these problems is the constant increase of Manila’s population and the subsequent pressure on its livability. This phenomenon is also causing concerns in the surrounding areas of Bulacan, Rizal, Laguna and Cavite. 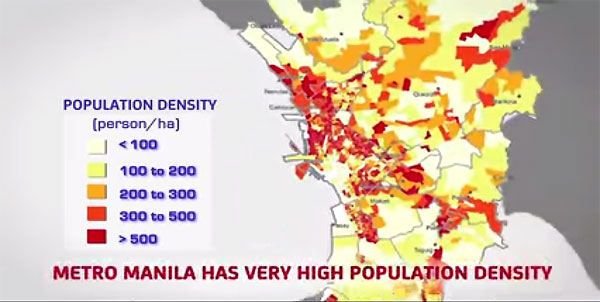 Metro Manila’s population is projected to reach 14 million people by 2030, while the “Mega Manila” urban area – comprising Bulacan, Rizal, Laguna and Cavite – should reach 30 million inhabitants, making it one of the largest mega cities in Asia together with Tokyo (35 millions), Jakarta (28 million), Seoul (26 million), Shanghai (25 million) or Karachi (24 million).

To cope with this rapid development, the National Economic and Development Authority of the Philippines together with technical assistance from the Japan International Cooperation Agency (JICA) have introduced a “Dream Plan”. It is a doable, integrated and long-term plan of transport and infrastructure for the sustainable development of Mega Manila that aims to achieve the following goals:

The Dream Plan includes Manila with Region III (Central Luzon) and Region IV A (Calabarzon provinces) to relieve the stress of urban development in a large, integrated and innovative urban area.

Rethinking of transports and urban zoning

The Dream Plan’s core idea is to transform Manila’s structure from a radial system to a ladder form with more cross-connections. In the larger urban Mega Manila area, it aims at becoming polycentric, with urban, regional and sub-regional centers that are connected with expressways and commuter rails. 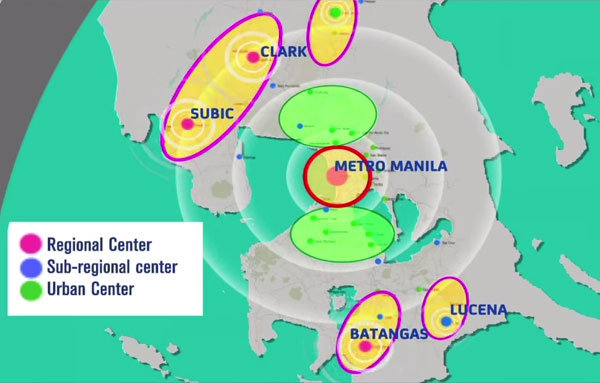 The ports of Manila, Subic and Batangas will be rethought in their respective roles to maximize capacities and development opportunities. The airports of Manila and Clark will be repurposed, and another airport of will be developed near Manila to rival the airports of Singapore and Hong Kong.

Transportation missing links will be completed or built, especially creating an integrated network of expressways inside Manila which construction has already begun. Urban and suburban rails systems will be expanded and densified; their capacity are already being increased.

Bus services will be integrated towards the South-West Manila and other areas. Buses and Jeepneys will be modernized with improvement of safety and reduction of air pollution, as initiated through the implementation of electric vehicles. Their routes, terminals and interchanges stations will also be reorganized.

To strengthen the whole transportation management system, intelligent technologies will be implemented. The modernization of traffic signalization and measurement for road safety has already started, while a comprehensive study will be launched to systemically analyze the various aspects of traffic management.

Benefits of the plan

The Dream Plan is also attainable as its funding is realistic through both public and private initiatives.

For more information, here is long version of the video which will provide more details on each of the points presented above.