Ride-hailing applications are weighing a fierce battle in Indonesia to conquer its large and promising market. Competing against global and regional giants, the local application Go-Jek has found a way to seduce an important base of users and secure large funding to fuel its diversified growth in hyper-local services.

Indonesian ride-hailing app Go-Jek was the first mover in motorcycle ride-hailing in the country. As the market maker in 2011, its success has been lightning fast with 4 million downloads in 6 months and about 25 million downloads as of November 2016. Its market share represents about 33% of all Android devices and 70% of all iOS devices in Indonesia. 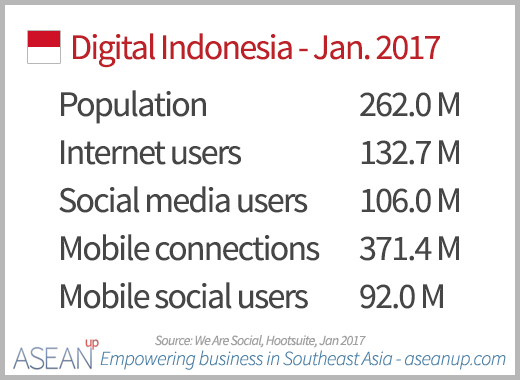 The market of 3.5 million daily commuters in Jakarta is nonetheless attracting new competitors Grab and Uber. But Go-Jek has significant advantages to remain ahead of them and develop further, beyond the motorcycle ride market.

A revolution of transport and technology in Indonesia

Jakarta’s massive traffic congestion is a great example of how time is wasted everyday by Indonesian in their journey from home to work and back. Since its launch, Go-Jek has modified the Indonesian’s perception of transports, and many car or bike owners now decide choose Go-Jek to save time. In essence, Go-Jek has been substituting its services to the interest for owning vehicles, losing time, paying parking, fuel and drivers.

Having conquered a significant portion of the ride-hailing market, Go-Jek is moving beyond transport. It has now launched several other services to cater to its large users base while enhancing the use of its technological and financial eco-system. With this strategy, Go-Jek has notably become the leader in Indonesia for food delivery with 90% of the market, and in digital wallet (digital currency payment and management).

Here is the complete list of its services as of December 2016:

Go-Jek’s objective is to concentrate on its core market of Indonesia and control all the verticals in which it is involved. It aims at reaping the benefits from its user-base while profiting from its strong government support to expand through various industries before thinking of growing regionally.

Becoming the largest platform for digital services in Indonesia is an interesting positioning for Go-Jek. It allows the startup to attract large funds looking to invest in the booming Indonesian technology sector. With its national foothold and diversified portfolio, Go-Jek has obtained 550 million US $ in funding from investors that are seduced by this “one-app-fits-all” strategy.

Go-Jek’s founder and CEO, Nadiem Makarim, is planning to invest this cash primarily in user acquisition and retention. Go-Jek will also spend tactically to make users involved in its app eco-system and familiar with its digital wallet to consume existing and upcoming products and services with cashless transactions.