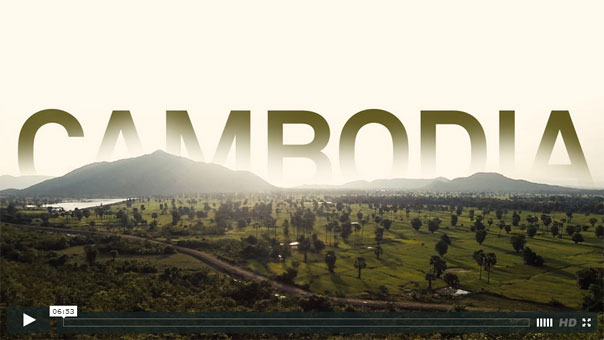 Amazing video taken shot by a drone in Cambodia – by Roberto Serrini, useful for embedding in any website presenting information on travel in Cambodia as well as NGOs that could be interested in showing the Cambodian rural life.

Here are the commentaries from Roberto Serrini on his vieo page.

CAMBODIA • On location in Phnom Pehn and the rural village of Anluk Leak, I was able to explore the cinematic beauty of this land from the sky.

While on assignment in Cambodia shooting a documentary for humanitarian aid in remote locations around the world, Filmmaker Roberto Serrini saw the opportunity to bring the audience to a location seldom seen by foreigners eyes in a way that was nothing less then breathtaking.

“I had no idea what to expect out there. This was a village that had no running water, no electricity, and has never even seen television. They are effectively cut off from the modern world, so a flying drone was bound to have them react in some way.”

The reaction was unlike anything Serrini could had imagined. While some locals ran from the DJI Phantom drone, others ran toward it, jumping and laughing, making faces at it, and were excited beyond belief.

“It was a truly amazing experience, as many of these children have never seen a working television, let alone a flying drone. The mixture of excitement, trepidation, and awesome wonder as they laughed and ran with it was incredibly inspiring. Every day I would come to the village they would gather around, and tug on my shirt, asking me to make it fly again. I never expected my filmmaking to bring this kind of joy in such an unorthodox way to anyone. It was amazing.”

The use of the drone equipped with a GoPro and Zenmuse gimbal was a no-brainer for the filmmaker and his co-director Sami Joensuu. The village, located deep within the Cambodian jungle, was so hard to reach, that to telescope that feeling to an audience the filmmakers realized they had to show it from above.

“The drone is just another tool in our kit, but a powerful one. The only way to have the audience understand how remote this area is, is to show how the jungle swallows up the village. When you see the miles of oxen trails cut through endless rice fields, distant mountains that cradle this small, fragile village, you begin to realize how amazing the task is to bring humanitarian aid like clean water and basic education to this remote community.”

While Serrini has been fortunate to shoot around the world with his drones, he feels that this latest trip has really set the bar for future projects.

“I’ve always been a flyer, and early adopter of aerial cinematography. While anyone with a relatively small budget can buy one of these rigs, it really does take a formidable amount of time to really master flying them, and being able to capture something beautiful. Being able to bring these sort of tools around the world and fly them in different countries and conditions really gives me the confidence to push the equipment farther, and hopefully continue to capture more beautiful footage.”

Roberto Serrini just completed a music video with Sean Combs (P. Diddy) where he shot the artist racing through frozen lakes on snow mobiles and a dog sleds. His next project will bring him to Thailand to work on a feature about underground Buffalo Racing.

“It’s an exciting time for areal cinematography. All the elements are there, you just have to put them together to get something beautiful.”

Roberto Serrini and his work can be found around the web, and on his personal site www.robertoserrini.com