Though Singapore is a rather small country in Southeast Asia, when it comes to mobile devices, Internet, social media and e-commerce, Singaporeans are some of the most active users in the region and the world. With such a mature digital market, Singapore has become a global hub and a regional capital for tech companies.

Here are the latest figures available for the digital population of Singapore, across different online activities: use of Internet, mobile devices and social media. 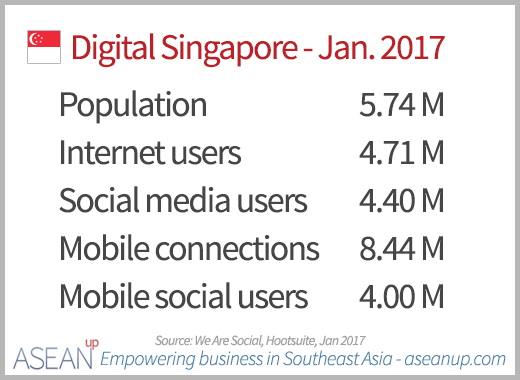 Though dating from 2013, the following presentation gives an overview of the digital landscape of Singapore together with details on digital habits of the Singaporeans, and comparisons with other countries of Southeast Asia and Asia-Pacific.

In 2013, Singapore counted about 4 million Internet users in a population of 5.350 millions, making for a Internet penetration of 86%. The e-commerce market was estimated at 3.08 Billion USD and the mobile commerce at 1.2 Billion USD.

In 2012, the penetration of digital devices in Singapore were:

In 2011, Singaporeans were the most frequent users of Internet in Southeast Asia, with 80% of people using Internet every day on all kinds of devices. They were also the first users of both free and paying mobile applications.

These numbers and the population’s habit of using digital technologies on a regular basis, greatly help e-commerce actors and the development of a robust startup ecosystem.

For more information on e-commerce in the region, check our Overview of E-commerce in Southeast Asia.

6 Replies to “Digital behaviors and habits in Singapore”