With a strong appetite for development, Myanmar has adopted a very accommodating fiscal regime. A low corporate income tax, a progressive but low personal income tax, no VAT but a light “commercial tax” and strong incentives, aim at attracting and helping companies to spur the development of Myanmar’s newly opened economy.

The main taxes levied by the Internal Revenue Department of Myanmar are the Corporate Income Tax, the Personal Income Tax and the Commercial Tax, as there is currently no Value-Added Tax. 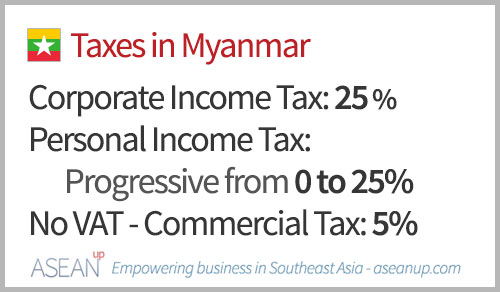 Companies in Myanmar are generally taxed at a standard flat Corporate Income Tax Rate of 25%. It is applied to all income from business or professional operations, properties and other sources, such as capital gains.

Companies are considered resident in Myanmar if they are formed under the Myanmar Resident Act, the Myanmar Foreign Investment Law – MFIL – or other Myanmar law. Branches of foreign companies are usually considered to be non-resident.

A 10% tax on capital gains is also levied on both resident and non-resident companies.

Companies registered under the MFIL benefit from a tax exemption of five years as well as for the production of goods or services and reinvested profits. They also enjoy an accelerated depreciation, a 50% reduction of tax on export profits and other tax deductions on imported equipment and machinery.

The Personal Income Tax rate in Myanmar is progressive from 0 to 25% depending on the amount of revenues. It is applied to all employment income such as salary (including perquisites and benefits), revenues from profession, business, property and other income.

Foreigners are considered tax residents if they reside in Myanmar at least 183 days in a calendar year. Myanmar citizens and resident foreigners, including foreigners working for MFIL companies, are taxed on their worldwide income. However, Myanmar citizens working outside of the country benefit from a tax exemption on salaries received abroad.

The Burmese personal income tax rate is progressive from 0% to 25% of yearly income as follows:

Further information on taxes of Myanmar

For more information on Corporate Income Tax and its exemptions, Personal Income Tax, the Commercial Tax and other specific taxes applied on particular goods and revenue sources together with information on registration and payments, check Myanmar tax leaflet 2016 created by Deloitte and the website of the Inland Revenue Department of Myanmar.